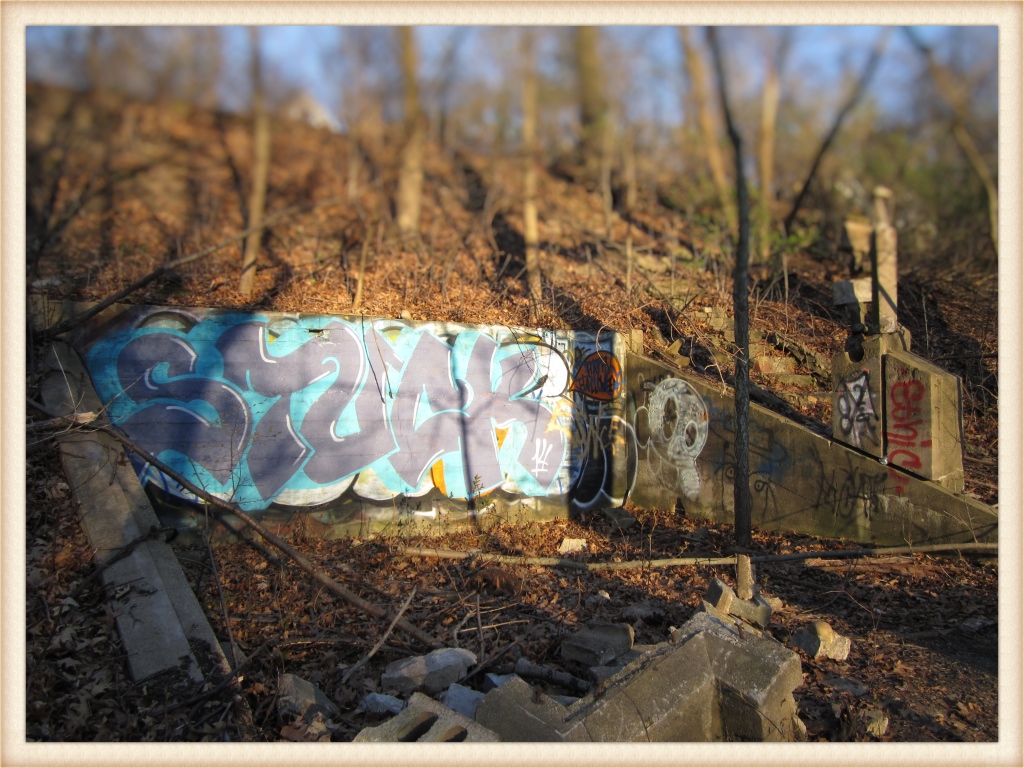 Only foundations remain of River Colony, a former neighborhood of a half-dozen year-round homes on the east bank of the Milwaukee River on the north side of the Locust Street bridge. The homes faced the water. Immediately to their rear the river bank climbed steeply to a railroad cut made by the Chicago & North Western Railway (today’s Oak Leaf Trail). East of the railroad tracks, the ground again rose steeply to Cambridge Avenue, about forty feet above the colony. Photo by Carl Swanson

Just north of the Locust Street bridge, Cambridge Woods Park narrows considerably squeezed between the Milwaukee River and the Oak Leaf Trail. Here the walking path passes a number of tightly spaced crumbling concrete foundations, some covered with graffiti, some barely more than rubble amid the weeds and wildflowers.

You are walking across the doorsteps of River Colony and in its day this was one of the most unusual neighborhoods in Milwaukee. 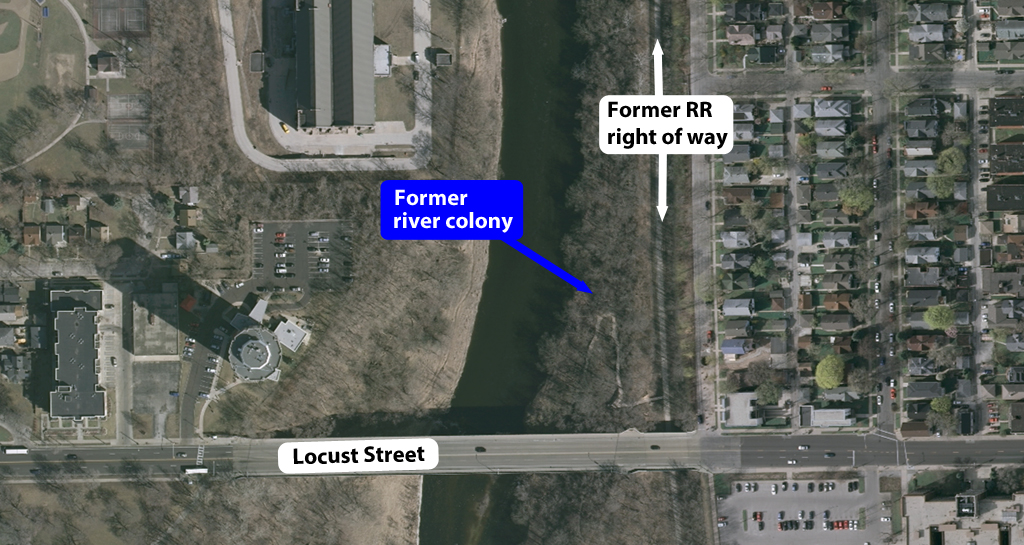 The half-dozen homes had electrical service, a sewer system, and water from the colony’s own well. What it lacked was an easy way in or out. In the winter, residents could simply drive their cars across the frozen river and park right at their own doorsteps but in the summer they had to park on Cambridge Avenue, cross Locust Street, descend a flight of wooden stairs to a tiny railroad passenger platform, cross three sets of tracks, and finally arrive home.

This photograph, taken from Locust Street bridge and facing north, is one of the few known images of the River Colony houses. The homes are on the river’s edge at right and include at least two substantial two-story dwellings with wide upper porches overlooking the river. The roofs of other homes can also be glimpsed. The Milwaukee River Pumping Station, which still stands, is at left. Courtesy Milwaukee County Historical Society

It must have been very a peaceful place to live, apart from the passing trains, although not quite as bucolic as you might think. In those days, this part of the river was much wider, thanks to the North Avenue dam, but if you were to go back in time and look across the water from these houses your view would have included, going from south to north, the towering Locust Street bridge, a massive ice house operated by Random Lake Ice Co., a large City of Milwaukee pumping station, and the twin ice houses owned by the Schlitz Brewing Co.

This odd corner of Milwaukee attracted newspaper attention in 1935 when the Chicago & North Western Railway decided to get rid of its Folsom Place depot. (“Folsom Place” was the former name of Locust Street and, almost under the south side of the Locust Street bridge, the railroad maintained a passenger train stop served by two trains a day.)

Service to the depot ended in the depression and the railway applied to the Public Service Commission to abandon the unused station. This proposal worried residents of River Colony. Without the station’s staircase, they would have to climb the steep clay hillside, difficult enough on a nice day but muddy and slippery in the rain.

Happily members of the commission and railway officials proved sympathetic and agreed, no matter what ultimately happened to the disused station, the staircase would stay.

In the mid-1960s, residents were evicted from their homes as plans moved forward to build a four-lane parkway along the former railroad right-of-way from the then-planned Lake Freeway north to a connection with the planned Bay Freeway, near Hampton Avenue. The parkway would have followed the east bank of the Milwaukee River between North Avenue and Hampton Avenue, passing through Riverside, Hubbard, and Estabrook parks. The parkway was designed to carry 47,000 cars a day and would have had a speed limit of 50 mph on some sections.

Opposition from neighboring residents, as well as preservation groups seeking to protect the river from extensive development, killed the plan in 1970. (Further north, the Bay Freeway ran into similar opposition was never built.)

A substitute proposal for a two-lane “pleasure parkway” with a speed limit of 25 mph – similar to existing river parkways in the county – was put forward and also eventually rejected. By then, only the foundations remained of the homes that once lined this section of the river.

Stop by if you get a chance. It’s cool here under the trees and the river is hypnotically soothing. It’s a nice place to visit, but would you want to live here? 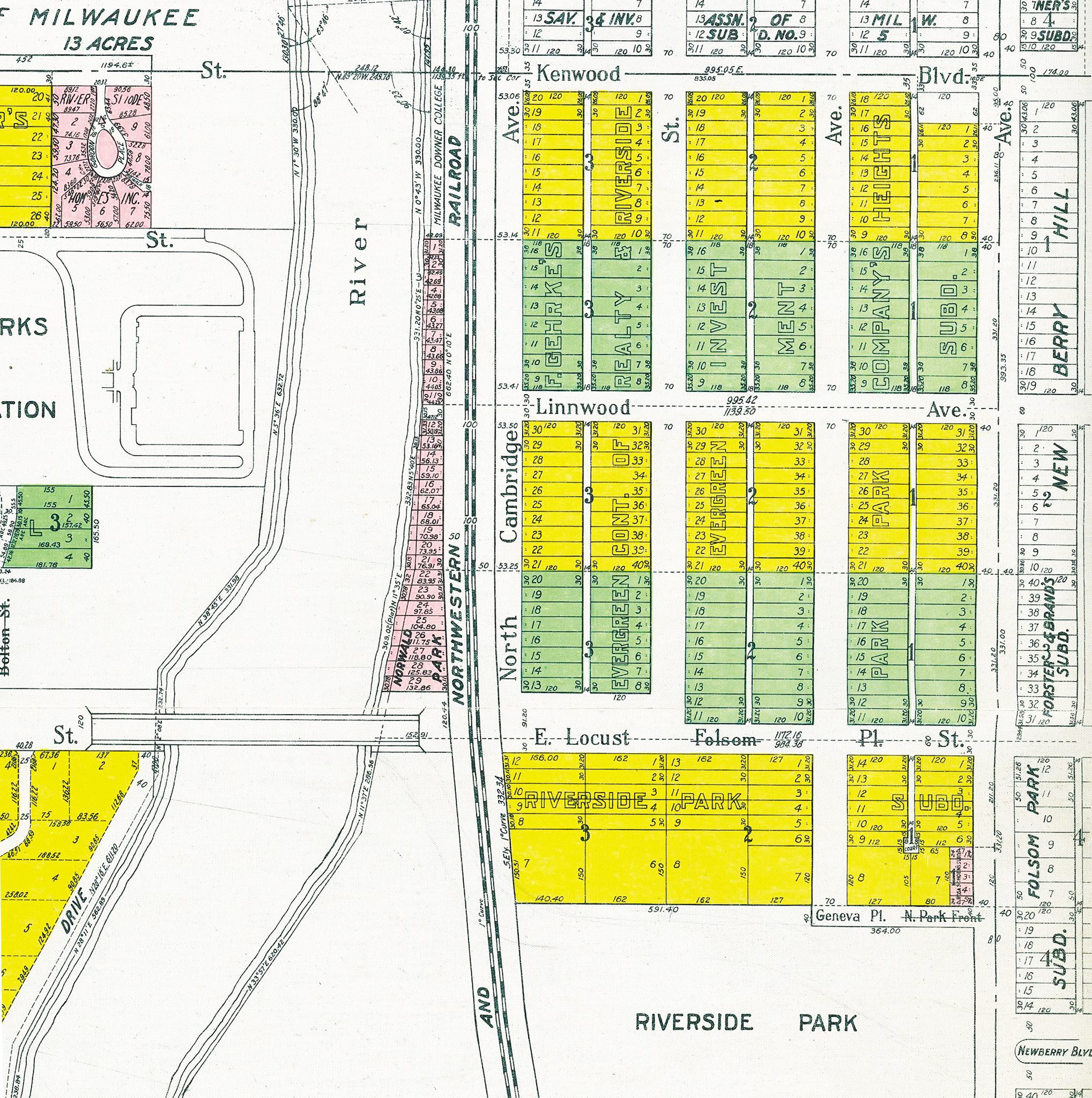