A Milwaukee transit strike 81 years ago resulted in three successive nights of rioting, massive property damage, scores of arrests, widespread injuries, and the death of a young man. It is one of the most significant labor disputes in Milwaukee history.

At stake was union representation for 4,700 employees of the Milwaukee Electric Railway & Light Co., the giant utility supplying the city with both electric power and mass transit. It ended with a union victory that helped pave the way for further labor inroads in the city. 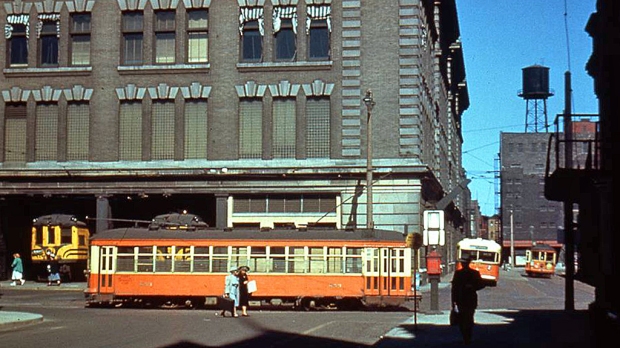 In 1934, most electric company workers were working under a contract negotiated by their long-standing in-house brotherhood, the Employes’ Mutual Benefit Association. The American Federation of Labor was hungry to represent those workers. But S.B. Way, the company’s president, knew few of his employees were AFL members and he was confident the courts would back the firm’s existing labor agreements.

Perhaps Way thought a strike, if one happened, would involve few workers and have little impact on operations. If so, he should have paid more attention to his own company’s history. In 1896, a transit strike lasted two months and was marred by violence, including torn-up rails, cut power lines, and the fire-bombing of streetcars. The company’s Employes’ Mutual Benefit Association was established as a result of the 1896 strike.

Whatever his thinking, Way flatly refused to negotiate.

A frustrated AFL, with backing from the Milwaukee Federated Trades Council and the state Federation of Labor, called a strike for 4 a.m. on June 26th. At first, it seemed Way had correctly judged the situation. Only 5 percent of company employees walked out. By midmorning most of the picketers gave up marching and went home. The city’s lights were on and its streetcars were running on time.

That night all hell broke loose.

A small-scale transit strike in 1934 became major news when thousands of rioters joined in.

As darkness fell, a crowd estimated at more than 30,000 jammed the streets around the utility’s power plants and the car barns where streetcars were maintained between runs.

Union officials blamed communist agitators for the violence. Actually no one knew quite what to make of it all. Puzzled newspaper reporters noted many of the protestors were young. Shorewood High School students, for example, marched in picket lines outside the Oakland Avenue car barn.

Regardless of who was causing the trouble, the Electric Co. announced it would hold the city liable for damages for failing to protect its property. Socialist Mayor Daniel Hoan saw red, accusing the company leader of arrogance. The mayor said Way was solely to blame for the violence, which “besmirched the city’s reputation.”

When 25 building trades and crafts unions voted to call for a general strike, the dispute appeared certain to spread citywide. 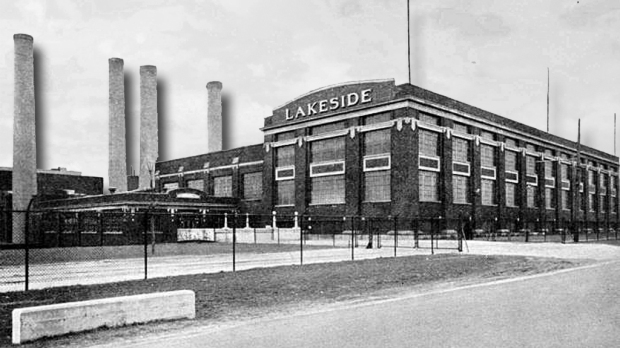 The Lakeside Power Pant in St. Francis was the scene of a fatal electrocution of a demonstrator during the transit strike of 1934.

On the night of June 28th, a mob of 2,000 people rushed the company’s Lakeside Power Plant in suburban St. Francis, where 180 non-striking workers were staying around the clock to keep the city’s lights on. While rioters smashed windows and attempted to force their way inside, a 24-year-old strike sympathizer named Eugene Domagalski joined a group armed with a steel post, which they proceeded to ram through a window – and straight into the back of a high-voltage control panel. Domagalski was fatally injured. One of his companions suffered severe burns.

Enough was enough. The next morning S.B. Way invited officials representing three AFL-affiliated unions to his office. Also in the room was Father Francis Haas, a priest serving as a federal negotiator. Way looked over the union’s demands, and said, “Gentlemen, I agree in practically everything here.” After some additional give and take, in which both sides showed willingness to compromise, an agreement was hammered out.

The deal was presented to the rank and file at a meeting in the downtown Elks Club. Father Haas, the government negotiator, opened with a prayer before he read the agreement. The deal was quickly ratified. The strike was over and a local legend was born, in which the power of prayer was credited with settling the dispute.

In 1952, the electric utility company sold its transit operations to the newly formed Milwaukee & Suburban Transport Co., which evolved into the private non-profit Milwaukee Transport Services. MTS presently operates the bus system under an agreement with Milwaukee County.

Strikes have stopped transit service on a few occasions since 1934, but nothing has equaled the four days of bloodshed and violence, which rocked the city 81 years ago.