Pleasant Valley Park, located on the west bank of the Milwaukee River south of Kern Park, contains a mystery. The only manmade structure in the undeveloped and heavily overgrown county park is a 250-foot-long pedestrian bridge emerging from a sloping hill, crossing a valley, and ending at the opposite wall of the ravine. No developed trails lead to it, although walkers have worn meandering paths to and from the structure.

It’s solidly built and impressively large – and it also seemingly serves no purpose. Why is it there?

I was recently contacted by WUWM Milwaukee Public Radio’s Bubbler Talk program, which was seeking the answer to a listener’s question, “Why is there a large bridge in the middle of the woods by the river in Riverwest that goes nowhere? Is it a remnant of Blatz Park?”

Blatz Park, originally called Pleasant Valley when it opened in 1870, was a popular beer garden at the turn of the last century. It featured a restaurant pavilion, live music, and extensive and beautifully maintained grounds. It was served by shallow-draft steamboats operating from a dock near the North Avenue bridge. A roundtrip was 15 cents and included stops at Wonderland Amusement Park in Shorewood and the beer garden in Pleasant Valley.

The park closed after World War I, a victim of changing tastes in entertainment and the rise of the private automobile. A swimming school briefly took its place until it, too, closed. In the 1920s, the land was sold to Milwaukee County by the Blatz family to facilitate the construction of a planned roadway along the river. The road was never built, and the land was handed over to the Milwaukee County Parks System.

Apart from a few concrete footings near the river, nothing remains of Blatz Park today and the mysterious structure is of far newer construction.

That gets us back to the original question. What the heck is this thing in the woods? Its thick, square cross-section suggests an enclosed aqueduct – a bridge for carrying water across a valley.

At first, I thought it might be a water main. After all, the structure is just north of the Riverside Pumping Station, which distributes fresh water from the treatment plant on the lake throughout this section of the city.

As I tried to get usable photos of this bridge/aqueduct/box culvert/alien artifact/whatever – no easy task given the thick woods – I noticed the covers of nearby manholes were lettered “sewer”.

I contacted the Milwaukee Metropolitan Sewerage District (MMSD) and asked if the bridge belonged to them. Keith Kalinger, Senior Project Manager, replied, “It’s actually a 60-inch sanitary sewer that transports flow south to the Jones Island Water Reclamation Facility. The current aqueduct was constructed in 1999 to replace an existing one whose plans date from 1918.”

He added, “It’s not even our only aqueduct. There is another one in Estabrook Park along the walking trail that starts near Capitol Drive.”

Rather than a bridge to nowhere, the aqueduct is a sensible response to challenging topography. It’s more cost-effective to run the line across an elevated structure than bury the pipe deep enough to go under the ravine in Pleasant Valley Park. Applied Technologies, the designer of the 1999 project, and Lunda Construction, its builder, gave some thought to its appearance. Tapered supporting legs flow into arches cast into the concrete surface. They also added stainless steel safety railings along the top to create an inviting walkway. The whole thing cost a half-million dollars in 1999. Pretty snazzy sewer!

We don’t often think of sewers. If they come to our notice at all it’s because something horrible is happening. Hidden and largely ignored, they are absolutely vital to the city’s wellbeing. Consider this glimpse of life before sewers from Orlando Wright, the city’s Commissioner of Health, who reported in 1879:

Sometimes, in a dry season, the sewage of Milwaukee nearly equals the quantity of water flowing in the rivers. At least 100 tons of human and animal excreta, to say nothing of other putrescible organic matters, are emptied into these sluggish streams every day. Their waters are dark with filth, and yet the question is asked whether they are unhealthy. If a thick solution of ordure is unhealthy, the Milwaukee and Menomonee rivers are certainly so.

First Annual Report of the Commission of Health of Milwaukee, January 1879

The sewer mains running along both banks of the Milwaukee River, intercepting wastewater and diverting it for treatment, were built in response to these intolerable conditions and are a major reason the river today is in a far cleaner and healthier state than it was in Milwaukee’s formative years.

Thanks to Kathryn M. Schmitt, MMSD contract compliance administrator, for her assistance with this article. 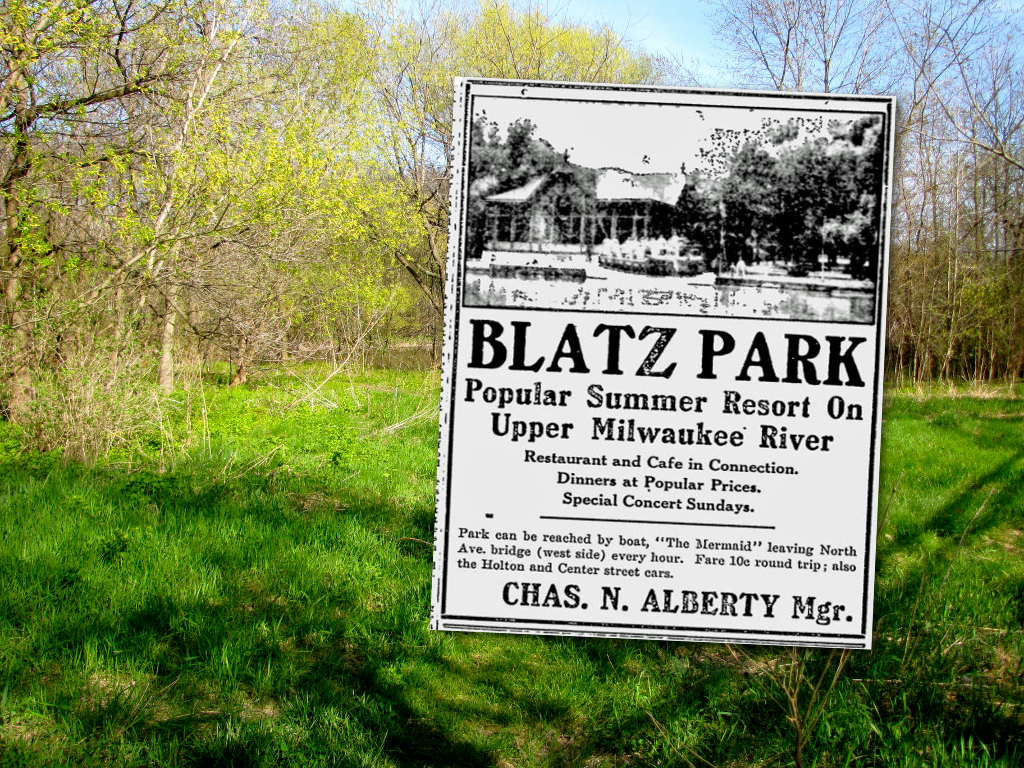 Pleasant Valley Park on the west bank of the Milwaukee River was once one of the city’s most popular beer gardens. Owned by the Blatz brewery and visited by thousands, it featured elaborate landscaping, a restuarant, bandshell, pavilion, steamboat dock, and even a few cottages. Little remains to remind visitors of its glory days a century ago. Photo by Carl Swanson

Pleasant Valley Park, at the foot of East Concordia Avenue on the Milwaukee River, is a peaceful place. The band packed up and left a century ago, about the time the steamboats stopped calling at the park’s dock. A little later, the pavilion, pier, cottages, and bandshell were torn down and the rubble removed. Officially this is a Milwaukee County Park but you wouldn’t know it by looking at it. There are no signs, no parking area, no picnic benches or ball fields, nothing at all to suggest it had ever been anything other than a ravine filled with downed trees and garlic mustard.

But once this was one of Milwaukee’s best-known beer gardens:

“Blatz Park (“Pleasant Valley” before 1892) swarmed with picnickers in those days. Troops of large families from St. Casimir’s Parish, a mile south, regularly followed a makeshift marching band up Humboldt Avenue to the park, each family pulling a coaster wagon containing a picnic lunch. Steam-powered boats, sailing from a dock just above the North Avenue dam, pulled up periodically at the pier and discharged crowds of passengers. The park had a bandshell and later a restaurant. There were also cottages, often rented in the summer, by one account, to actors from a theatre downtown.” – From Riverwest: A Community History, by Tom Tolan, copyright 2003, Past Press, Milwaukee, WI.