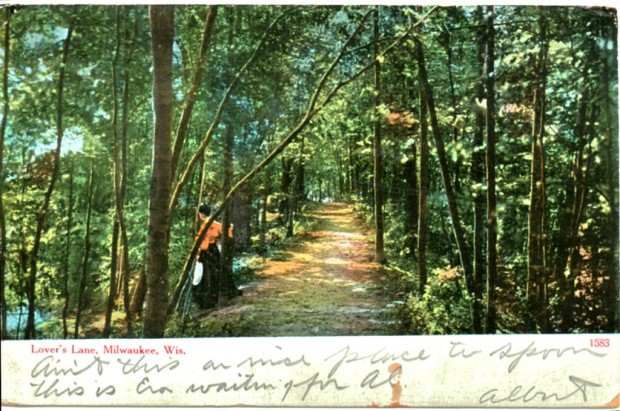 An antique postcard adds a fresh perspective to a post from last year on the end of Kern Park’s “Lover’s Lane.” Read it here.

This early 1900s postcard shows Milwaukee’s “lover’s lane.” The card was mailed by a man named Albert to a Miss Evaline Beecher of Sauk City and reads, “Ain’t this a nice place to spoon. This is Eva waiting for Al.” Let’s hope it worked out for those crazy kids, 106 years ago. Carl Swanson collection

The Milwaukee Notebook has a few loose pages, minor items that don’t amount to much in the life of a city but are still worth mentioning. Here’s an example: In its August 19, 1931 edition, the Milwaukee Sentinel reported:

Lovers’ lane in Kern Park is doomed. That dark, alluring walk under the trees beside the Milwaukee River – illuminated by no more than the moon – won’t be that way much longer.

A thousand dollars worth of lights are to be strung along the walk the park board has decided. It approved a recommendation by Al Riemenschneider, park engineer, to include that sum in next year’s budget.

I checked the other day. The lights are no longer there. However, I didn’t see any lovers either so, from a ‘moral standpoint,’ we must be behaving ourselves these days. 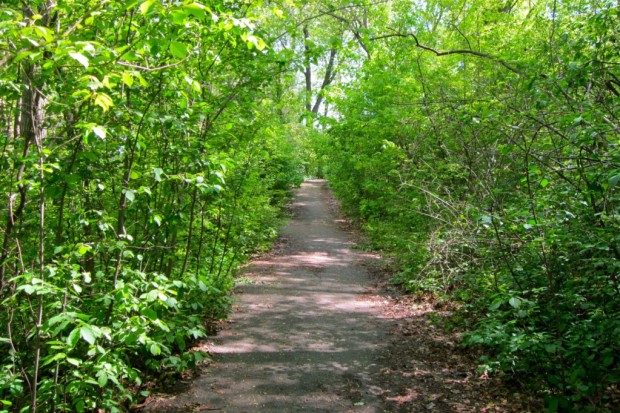