A color printing press is a miraculous machine. As big as a house (and the newest ones are much bigger than that), packed with rollers and gears turning at blinding speed, producing tens of thousands of printed sheets per hour, they are so precisely made that a single part misaligned by a few thousandths of an inch would ruin the output.

One of the early pioneers in color printing, Leslie Claybourn, built a factory in Riverwest in 1922 and his workers were soon turning out printing presses that were more innovative, more massive, and more precise than any before. His company attracted visitors from around the globe and even held the record for a time for the world’s largest color press.

Then, in 1957, it all came to an end. Other companies would occupy the 172,344-square-foot factory at 3701 North Humbolt Boulevard over the subsequent years but it stands empty today.

Leslie Claybourn was born in Albert Lea, Minnesota, in 1884. He started an electroplating company and then a machine shop. Business being slow at times, he augmented his income by moonlighting as a professional wrestler. Known as Lex “The Terrible Swede” Claybourn, he was good enough to hold the lightweight championship at one point.

It is not known when he hung up his wrestling tights, but by 1914 he was working as a development engineer for a Cincinnati printing machinery company. In 1918, Claybourn became vice president and director of operations for the Menasha Printing & Carton Co. While there, he perfected a process for printing pictures on butter and ice cream cartons.

His patented techniques, involving both improved machinery and new ways of producing printing plates, attracted a great deal of industry attention. In 1921 he was able to organize the Claybourn Process Corporation and built a large factory on Humboldt near Keefe Avenue.

One of the company’s first customers was the Milwaukee Journal. Other newspapers followed, including The New York Times. The Philadelphia Inquirer, Cleveland Plain Dealer, and many more. By 1929, Conde Nast was printing Vogue on a Claybourn five-color press.

In a 1929 article, a national trade publication, The Pressmen’s Journal, wrote, “Mr. L.W. Claybourn is one of the outstanding geniuses of the printing industry of the world, and it has been said by many authorities in the printing and printing machinery fields that Mr. Claybourn is actually 25 years ahead of the industry.”

On the last day of 1930, Claybourn’s car was involved in a collision at the interaction of North Prospect and East Newton avenues. So violent was the impact that Claybourn’s car was thrown sideways into a unity pole, snapping it off at its base. He spent all of 1931 in a cast and never fully recovered from his injuries.

It would take more than that to sideline “The Terrible Swede.” In 1934, the Claybourn company made headlines when it unveiled a 72-ton five-color press able to print 4,000 sheets per hour while cutting set-up time in half. The gain in efficiency was startling. This high-speed full-color press could be up and running as quickly as a relatively simple two-color press.

But in those dark years of the Great Depression excellence in design and manufacture might not be enough to save a company. In 1937, with the Milwaukee plant struggling to stay afloat, Connecticut-based C.B. Cottrell & Sons Company acquired the firm.

Claybourn stayed briefly to help with the transition, then moved on to work with many other printing firms. At the time of his death in 1956, he held more than 200 patents for printing innovations.

The Riverwest plant’s new owner, Cottrell & Sons, traced its roots as a machine builder all the way back to 1855. By the time of the Civil War, the firm was specializing in printing presses. The firm sent Donald Cottrell, grandson of the founder, to manage its newly acquired Milwaukee operation. A graduate of Harvard, he had served as captain of an infantry company in World War I. He also had a local connection—Charles Ilsley, chairman of the board of Marshall & Ilsley Bank, was a classmate of his at Harvard.

Cottrell would lead the company out of the Depression and through years of wartime production in World War II.

In 1943, the company plowed a 13,000-square-foot plot near the factory and its employees planted and tended a victory garden. The Milwaukee Journal reported that, among other things, the garden had 480 tomato plants, which produced far more than its employees could consume at home. A bushel basket of tomatoes was kept in the factory in late summer for snacking. Their agricultural efforts earned the company’s workers a trophy from the National Victory Garden Institute.

In 1953, Cottrell & Sons was itself taken over by the Harris-Seybold Co. and the Milwaukee plant had another owner. By 1955, the factory had 165 employees and was building rotary color presses that weighed 40 tons and measured 42 feet long.

In 2015, the Wisconsin Historical Society sponsored a survey to find industrial properties that might be eligible for inclusion in the National Register of Historic Places. The report concluded the C.B. Cottrell & Sons, Claybourn Division factory is “significant as an example of an early-twentieth-century industrial complex with a consolidated plan. The first factory and warehouse were constructed in 1922, and the Classical Revival main office was constructed in 1927. In the 1950s and 1960s, the plant expanded at the rear; however, the complex retains the character-defining features of the form including the large expanses of original window sash, roof lighting, and a consolidated plan. The C.B. Cottrell & Sons buildings retain a high degree of integrity and are therefore potentially eligible.”

If a historical marker is erected, which seems unlikely, it might quote the founder, Leslie Claybourn, who told The Pressmen’s Journal in a 1929 interview, “Printing is a mechanical problem. Establish accuracy and precision into the locked-up form to be printed or moulded from, which is the very foundation of the printed job, and you will print that form correctly in spite of yourself.”

Maybe it could also mention the tomatoes.

Built more than a century ago, this stone tunnel portal in the east bluff of the Milwaukee River is near the intersection of North Cambridge Avenue and Hampshire Street. Partly filled in and heavily vandalized, it remains impressive — and mysterious. Carl A. Swanson photo

There is a mystery in Cambridge Woods Park on the east bank of the Milwaukee River — an ancient tunnel made from carefully cut and fitted stone blocks and large enough to drive a truck through.

From its portal in a bluff at the foot of Hampshire Street, the tunnel extends eastward under the Oak Leaf Trail only to end abruptly at a modern concrete wall about 60 feet inside the entrance.

Who built it? And for what purpose?  END_OF_DOCUMENT_TOKEN_TO_BE_REPLACED

A shopping cart at the north end of Richards Street marks the former location of Cracker-Jacks Park. This once-popular privately owned picnic grounds on the west bank of the Milwaukee River is nearly forgotten today. Carl A. Swanson photo

On the Fourth of July, 1938, two sisters, ages 6 and 12, seeking a spot to watch the Estabrook Park fireworks from the west bank of the Milwaukee River found trouble instead. As they approached the bluff, an adult male emerged from the bushes, slapped the 6-year-old twice across the face, picked her up, and carried her off down a ravine.

Fortunately, help was nearby. Henry Kaeding, a resident of the 4200 block of North Richards Street, came running at the sound of the older girl’s screams and charged into the ravine in pursuit of the abducted child and her assailant.
END_OF_DOCUMENT_TOKEN_TO_BE_REPLACED

Twenty tons of candy were made each day in this seven-story building at 408 W Florida St. The former home of the George Ziegler Candy Co., it was recently remodeled into upscale housing and is now known as the Brix Apartment Lofts. Carl A. Swanson photo

Although its reputation has more to do with brewing than bon bons, Milwaukee once ranked among the top five candy-producing cities in the United States. Even in the bleak years of the Great Depression, the city′s 16 candy factories employed 2,000 people with annual sales of $7.8 million. One of the 16 firms, the George Ziegler Candy Co., was founded before the Civil War and lasted into the 1970s. Its annual production averaged 12 million pounds, the Milwaukee Journal noted in a 1920 article. That’s about 20 tons of candy produced each working day. This is a story about chocolate. And a fire hose. But mostly chocolate. END_OF_DOCUMENT_TOKEN_TO_BE_REPLACED

Nothing remains today, but for 60 years, the Wells Street viaduct was a Milwaukee landmark and the single greatest engineering achievement of the city’s once-vast streetcar and interurban empire.

As a thrill ride, albeit an unintentional one, the viaduct had few equals – especially when high winds buffeted the cars. Even veteran riders felt apprehensive as their streetcars rattled and swayed across the rickety-looking 2,085-foot-long bridge, 90 feet above the Menomonee River valley.

The Gordon Park bathing pavilion was the most popular blog post for the second year running. Photo by Jos. Brown.

These are the top five posts of 2015. Have you read them all?

A former Milwaukee movie palace turned church is now for sale. It was originally among the city’s finest theaters, but things really got interesting when a faith-healing evangelist came to town. Carl Swanson photo

In 1930, Milwaukeeans wishing to see a movie had their choice of 89 movie theaters. They ranged from modest neighborhood movie theaters like the Grand on Holton Street to “movie palaces” – dazzling cost-is-no-object cathedrals of motion pictures.

The Oriental Theater on Farwell Avenue is a surviving movie palace. Less known is the 1,300-seat Zenith Theater at 2498 W. Hopkins St. It survived largely because of a traveling faith healer, whose colorful antics captivated – and occasionally angered – Milwaukeeans.

END_OF_DOCUMENT_TOKEN_TO_BE_REPLACED

Doors Open Milwaukee was held Saturday and Sunday, September 19th and 20th. About 200 locations, many normally closed to the public, were open for visitors. Here are five of my favorite places to visit during this annual event.

Although the area is undergoing rapid redevelopment, some of the original Pabst buildings remain. Photo by Carl Swanson

Tour a speakeasy (actually, the former plant infirmary and ancient storage tunnels) at the Best Place at the Historic Pabst Brewery, 901 W. Juneau Ave. The speakeasy is open if the red jelly jar light is illuminated at the doorway marked “J.C. Haertel Real Estate & Financial Consulting.” The Pabst Brewing Co. was the subject of this Milwaukee Notebook post. END_OF_DOCUMENT_TOKEN_TO_BE_REPLACED 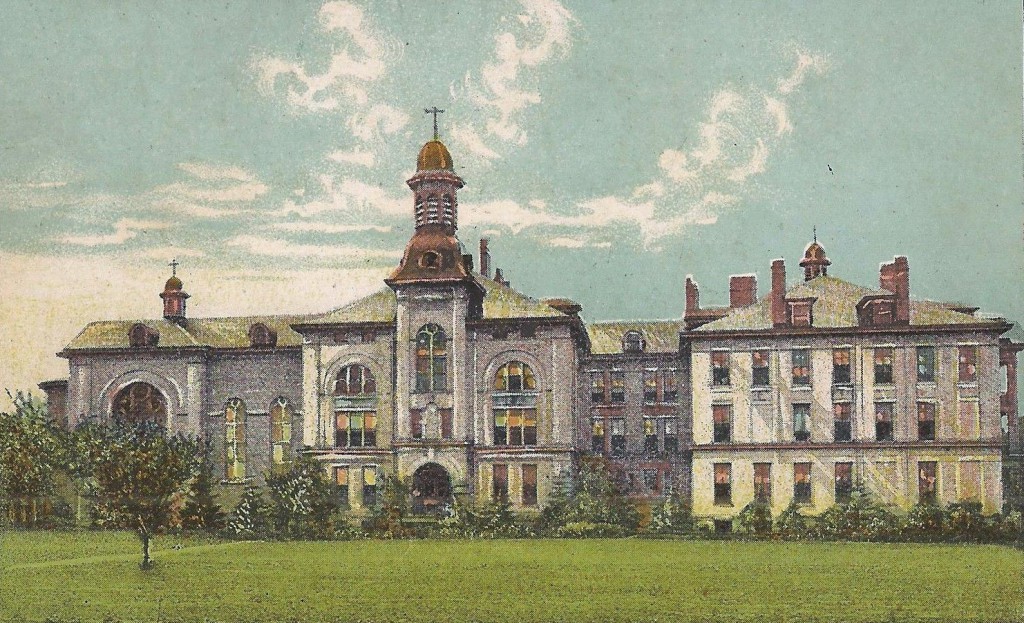 One morning in February 1929, four boys, residents of St. Aemilian’s Orphan Asylum in St. Francis, were sorting cabbages in the cellar of the massive building. When this chore was completed they joined 170 other residents for a lunch of beans and sauerkraut. That morning, though, they found something more appetizing – a small paper bag containing what seemed to be sweet-tasting cookie crumbs.

By the afternoon of the following day, two of the boys, Philip Giganti, 13, and Joseph Djeska, 12, were dead. The other two, Frank Novakovich, 13, and his brother Paul, 12, were desperately ill. The orphanage’s staff physician, along with another doctor called in to assist, had no difficulty establishing the cause – arsenic poisoning. END_OF_DOCUMENT_TOKEN_TO_BE_REPLACED

This concrete foundation, atop a river bluff south of Gordon Park, was part of the Wisconsin Lakes Ice & Cartage Company’s Center Street icehouse, destroyed in a massive fire a century ago. Carl Swanson photo

A concrete foundation in the woods south of Gordon Park in Milwaukee’s Riverwest neighborhood is all that remains of the Wisconsin Lakes Ice & Cartage Co. Center Street icehouse. The 350 x 100-foot icehouse, built in the late 1800s alongside the Chicago, Milwaukee & St. Paul RR’s “Beer Line,” was one of several icehouses on the upper Milwaukee River. The icehouse burned to the ground in a spectacular multi-alarm fire in June 1911.