A shopping cart at the north end of Richards Street marks the former location of Cracker-Jacks Park. This once-popular privately owned picnic grounds on the west bank of the Milwaukee River is nearly forgotten today. Carl A. Swanson photo

On the Fourth of July, 1938, two sisters, ages 6 and 12, seeking a spot to watch the Estabrook Park fireworks from the west bank of the Milwaukee River found trouble instead. As they approached the bluff, an adult male emerged from the bushes, slapped the 6-year-old twice across the face, picked her up, and carried her off down a ravine.

Fortunately, help was nearby. Henry Kaeding, a resident of the 4200 block of North Richards Street, came running at the sound of the older girl’s screams and charged into the ravine in pursuit of the abducted child and her assailant.

The highlighted area, two blocks north of Capitol Drive, shows the location of the former Cracker-Jacks Park. Richards Street runs along the west boundary of the park, to the east is a parking lot, which was, at the time the park was in operation, a large manmade lake connected to the Milwaukee River.

This incident, reported in the July 5, 1938, edition of the Milwaukee Journal, took place in Cracker-Jacks Park, a privately owned picnic ground at the end of North Richards Street, two blocks north of Capitol Drive, on the river’s west bank.

The park, with its abundant shade trees, 5-cent beer (in the early 1900s), and open space for baseball and other sports, was a favorite spot for everything from family picnics to large club gatherings through the 1930s.

Changes in land use over the years have obliterated the former park. Part of land was purchased by the Deutscher Schaeferhund Verein, a dog training club, in the mid-1930s. The organization, now known as the Milwaukee Dog Training Club, still uses the land as an outdoor training ground. In the 1950s MilPrint built a massive printing plant on much of the remainder of the site, a building now repurposed into storage and space for non-profits. 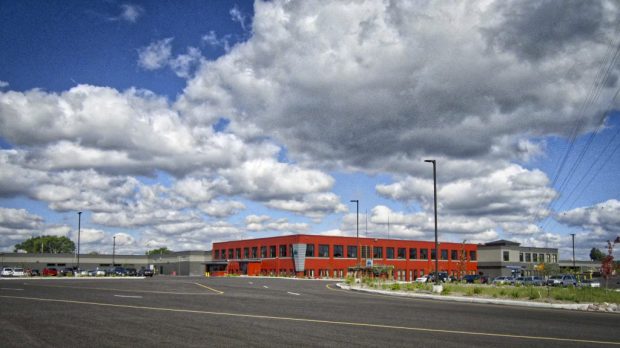 In the 1950s, Milprint, a company specializing in printing snack food bags and wrappers, built a gigantic printing facility covering most of the former park. The massive building remains and now hosts a variety of business and non-profit operations. Carl A. Swanson photo

While the park lasted, it hosted a number of memorable gatherings. For example, one weekend in August 1921, the entire park was reserved for a Harley Davidson riders’ picnic. Just a month earlier, the same park had witnessed heroism – and tragedy.

As reported in the Milwaukee Sentinel of July 3, 1921, a young man named Gilbert Guy was swimming in the Milwaukee River at Cracker-Jacks Park when he noticed a pair of 14-year-old girls clinging to a raft and screaming for help as they were being swept rapidly downstream.

Guy caught up to the raft and towed the girls to safety. As passersby helped the teenagers scramble ashore, Guy suddenly vanished underwater. He was swiftly located and pulled from the river but attempts to revive him failed.

In 1934, the first annual German Day festival took place at Cracker-Jacks Park. It kicked off with a parade featuring eight marching bands and a choir of 600 children singing German songs. The parade started at North Fourth and West Center streets, wound its way north along Green Bay Avenue, then east to the park, where, the Milwaukee Sentinel reported, “a program of music, gymnastics, and sports lasted far into the night.”

More significantly, the Sentinel noted (in its July 7, 1934, edition), event organizers made a point of not inviting Milwaukee’s pro-Hitler organizations, which included the National League of the Friends of the New Germany, the Stahlheim (Steel Helmets), and the Deutsche Ehre Legion (German Legion of Honor).

It was the first indication, and a very public one, that leaders of the local German community did not support the aims of the pro-Nazi groups.

Returning to the 1938 child abduction, Henry Kaeding, searching the ravine, found the 6-year-old biting and kicking at her assailant. The man released the child and ran when he saw Kaeding approaching.

In the meantime, the July 5, 1938, Milwaukee Journal reported, two police officers stopped their squad car to make a call at a police telephone box on North Richards Street and saw the 12-year-old sister crying by the side of the road. When they heard her story, the officers phoned for backup and joined the search. Two additional squads arrived within moments.

The six police officers soon cornered the abductor. According to police, the man, a 23-year-old plumber’s assistant, strenuously resisted capture, which, authorities said, explained the “numerous contusions, abrasions, and lacerations” the would-be child molester sustained in the course of his arrest.

The girl was physically unharmed. Her attacker, the newspaper noted, was still recovering in a hospital and facing a charge of assault with attempt to rape. 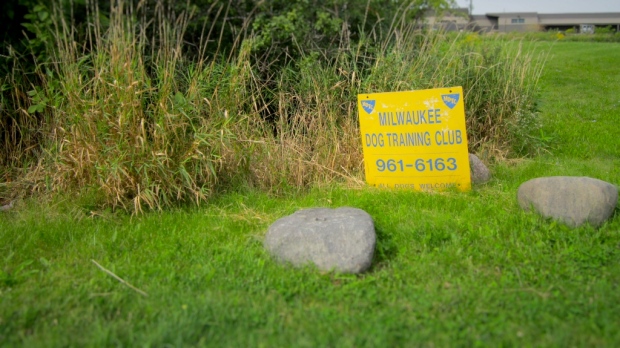 In the 1930s, the Milwaukee Dog Training Club purchased the parcel of park land located closest to the river. The property is still used by the club for outdoor obedience classes. Carl A. Swanson photo