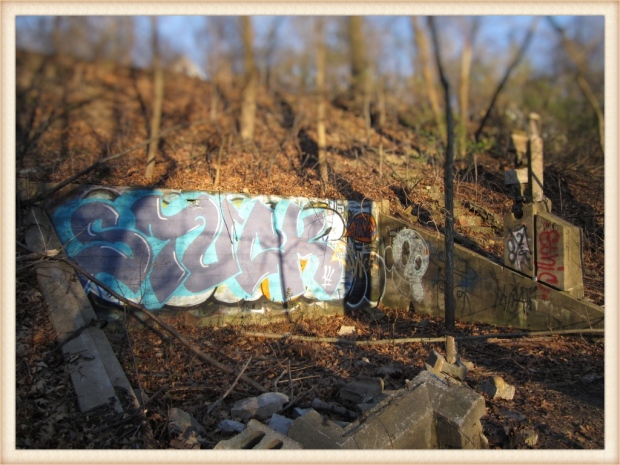 Only foundations remain of River Colony, a former neighborhood of a half-dozen year-round homes on the east bank of the Milwaukee River on the north side of the Locust Street bridge. The homes faced the water. Immediately to their rear the river bank climbed steeply to a railroad cut made by the Chicago & North Western Railway (today’s Oak Leaf Trail). East of the railroad tracks, the ground again rose steeply to Cambridge Avenue, about forty feet above the colony. Photo by Carl Swanson

Just north of the Locust Street bridge, Cambridge Woods Park narrows considerably squeezed between the Milwaukee River and the Oak Leaf Trail. Here the walking path passes a number of tightly spaced crumbling concrete foundations, some covered with graffiti, some barely more than rubble amid the weeds and wildflowers.

You are walking across the doorsteps of River Colony and in its day this was one of the most unusual neighborhoods in Milwaukee.

END_OF_DOCUMENT_TOKEN_TO_BE_REPLACED

Dividing the heavily populated East Side from the just as heavily populated Riverwest neighborhood is the Milwaukee River looking, in places, much as it did when Native Americans were the only area residents. Its survival in a relatively natural state is pretty amazing when you think about it, especially when you recall this stretch through Cambridge Woods Park was part of a planned but never-built four-lane riverside parkway. To their eternal credit, Shorewood residents were instrumental in fighting this ill-advised proposal to a standstill back in the 1970s. Photo by Carl Swanson