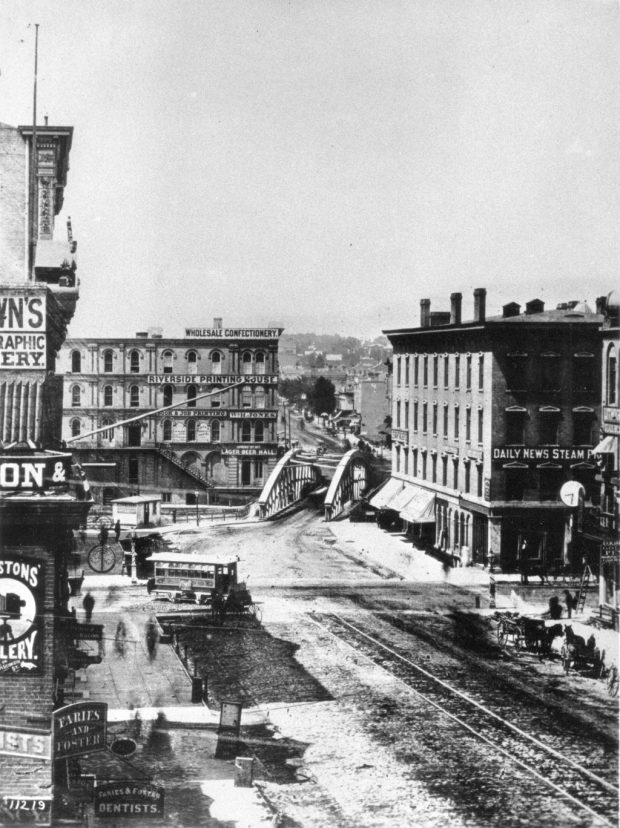 The Wisconsin Avenue bridge across the Milwaukee River as it appeared in the 1870s. Note how the East and West side streets do not line up. Carl A. Swanson collection

In 1845, an argument over who should pay for civic improvements escalated to the point that a cannon was wheeled out to threaten the west side of town with artillery fire. The dispute ended in the wrecking of most of the bridges in town.

They called it the Bridge War. END_OF_DOCUMENT_TOKEN_TO_BE_REPLACED

One recent day in Milwaukee’s Juneau Park, a strolling couple paused to look at an imposing statue. Reading the name on the pedestal, one asked, “Who’s Solomon Juneau?”

The short answer is he was a fur trader who turned a cabin in the wilderness into a thriving city. He developed the downtown and the East Side. He donated land and materials for the first courthouse. He was Milwaukee’s first postmaster, its first village president and, when the city was incorporated, its first mayor.

Juneau made a fortune and lost practically everything. He made many friends and kept them all. The pallbearers in his funeral procession included four chiefs of the Menomonee Nation.