This factory, the former home of Globe-Union, at 900 E. Keefe Ave., was once the employer of electronics genus Jack Kilby, and may even have started him on a path that eventually changed the world. Carl A. Swanson photo

The device upon which you are reading this, the network you used to access it, along with every modern computer, smartphone, GPS device, in fact, the entire digital age was born in 1958 when Jack Kilby, an electronics engineer with Texas Instruments, designed the first integrated circuit built on a piece of semiconductor material. As Thomas Fehring, author of the new book, The Magnificent Machines of Milwaukee and the engineers who created them, explains, this world-changing invention may have its roots in a company located in Milwaukee’s Riverwest neighborhood.

Globe Electric Company was founded in Milwaukee in 1912 by G.W. Youngs, D. Decker and Julius H. Gugler. However, the real genesis of the enterprise was the formation of the Milwaukee Electric Construction Company in about 1905 by Oscar Werwath. Werwath established his company to provide work for students at his newly formed School of Engineering, to help defray tuition expense and provide students with hands-on training. Milwaukee Electric Construction’s principal product was electric storage batteries. The demand for these batteries eventually exceeded the available space for their production and Werwath sold the business to a Youngs, Decker and Gugler.

Early Globe automobile batteries were made of thick lead plates, which were enclosed in glass jars. The jars were then inserted into a lead-lined wooden box. Photograph courtesy of Johnson Controls archives.

Globe Electric initially produced electric storage batteries for streetcars, as well as for rural light plants and switchboards. The company expanded into the manufacture of batteries for automobiles and radios, and entered into the farm electric plant business.

In a series of transactions, the company merged with Western Engine & Dynamo and Western Utilities in 1919, retaining the Globe Electric Company name. The resulting company included John I. Beggs of the Milwaukee Electric Railway & Light Company as president, Julius Gugler as vice president, John Daniel Wanvig, Jr. as secretary and general manager and Chester Odin Wanvig as treasurer. It established its combined operations the following year at 900 East Keefe Avenue, just south of Capitol Drive and about a block west of the Milwaukee River.

In the early 1920s, Globe Electric introduced a battery-powered radio, which it produced for a number of years, before concentrating on the production of various radio components including a “low-loss” tuner, which was patented in 1924. The Globe tuners were featured in stories of commendation by every radio magazine of the era.

Battery production was somewhat seasonal in nature. In order to help fill the manufacturing void that occurred in the summer months, the company manufactured clip-on, adjustable roller skates for many years. As a result, the Globe-Union name was well recognized by Milwaukee children of the era. The company also manufactured spark plugs and, during the early years of the Great Depression, golf clubs.

These Globe-Union roller skates were popular on Milwaukee sidewalks in the 1940s and 50s. Inexpensive, they clipped onto a pair of regular
shoes. Their metal wheels made quite a chatter on concrete sidewalks. The company also made similar clip-on ice skates. Courtesy Thomas H. Fehring

During the Second World War, most of Globe-Union’s battery production went into wartime efforts, including the production of batteries for Army Jeeps and other vehicles. The company was also called upon to expand its radio parts business, producing radio communication devices through its newly formed Centralab Division.

During the later stages of the war, Centralab was also asked to design a proximity fuse for cannon shells. These fuses used a special radar sensor to detect the proximity of the target and to explode just prior to impact. It was a difficult engineering feat because the circuits had to withstand the incredible force of being fired from a cannon. The fuses also needed to be produced quickly and in quantity. Centralab met the requirements by employing a ceramic plate that was screen-printed with metallic paint for conductors, and used a carbon material for the resistors. Ceramic disc capacitors and subminiature vacuum tubes were soldered in place. This circuit design, which eventually became known as a thick-film hybrid circuit, was successful. Armaments equipped with these proximity fuses were critical during the Battle of the Bulge, as well as during engagements on the Pacific Front.

Following the war, Centralab’s considerable experience with electronic circuitry miniaturization and early techniques for placing silver “ink” on a ceramic base to replace wiring led the division to pioneer in the production of various electronic devices, including printed circuits for hearing aids.

In 1947, Centralab hired engineer Jack Kilby, who had just graduated from the University of Illinois-Urbana. Kilby was put to work designing various consumer electronic products using this ceramic base, silk-screen circuit technology. While there, Kilby had a number of patents. He was also exposed to a new innovation—the transistor.

Kilby was employed by the Centralab Division of Milwaukee’s Globe-Union between 1947 and 1958. He concentrated in the area of electric circuit miniaturization. In his memoirs Kilby related, “This was a fortunate choice for me, because they worked with hybrid circuits—an early form of miniaturization.” 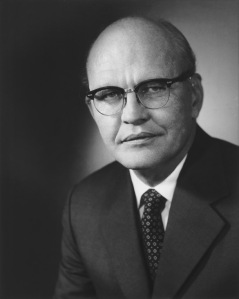 Centralab also exposed Kilby to transistor design concepts, sending him away in 1952 to study the emerging technology via a course sponsored by Western Electric’s Bell Laboratories in New Jersey. Upon returning from this course, Kilby was given the responsibility to design and build the tooling to make transistors—a reduction furnace to make germanium, a zone refiner to purify it, and a crystal puller to grow the germanium crystals. He had to also build or purchase related tooling, such as testing equipment and ultrasonic saws.

Kilby also attended a lecture by Nobel laureate John Bardeen sponsored by the Marquette University physics department on the research that led to the development of the transistor. During his talk in May 1957, Bardeen focused in the miniaturization of circuits made possible with transistors.

In March 1958, Kilby received a bonus for doing outstanding work the preceding year. A letter accompanying the bonus from the president of Globe-Union congratulated him. However, the letter also noted the deteriorating business conditions the industry faced, and hinted that there may be difficult times ahead.

Jack Kilby started to explore other positions—interviewing with Texas Instruments, IBM and Motorola. By May, he received offers from both Motorola and Texas Instruments, and decided to accept TI’s offer, which stated, “We want you to work in our new micro-miniaturization department.” The position was obviously a good match for Kilby’s experience, based on his decade of work at Centralab. 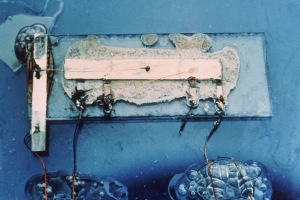 Jack Kilby invented the integrated circuit at Texas Instruments in 1958. Comprised of only a transistor and other components on a slice of germanium, Kilby’s invention, 7/16-by-1/16-inches in size, revolutionized the electronics industry. The roots of almost every electronic device we take for granted today can be traced back to this invention 60 years ago. Courtesy of Texas Instruments

Kilby left Centralab on May 15, 1958, and traveled to his new job in Dallas, Texas. Soon after arriving, the company had its annual summer break during which most employees took a vacation. Kilby, as a new employee, did not yet have the right to take a vacation. As a result, he was left almost alone for the period. During that summer break, using borrowed and improvised equipment, Kilby designed and completed the first electronic circuit in which all components were fabricated on a single piece of semiconductor material. The circuit was half the size of a paper clip—a dramatic achievement in miniaturization.

The full circuit was successfully demonstrated on September 12, 1958. Kilby later invented the first integrated circuit-based calculator. By the 1970s, it became available for general consumer usage.

The microchip has been in existence for less than sixty years, but it would be fair to say that in that time it has changed the world. The technology has created completely new industries and provided the technology behind computers, smartphones and other devices that would have been impossible without Kilby’s innovation.

Kilby returned to Milwaukee in 2001 to attend a ceremony held at Johnson Controls. The company recognized him for his innovations while at Centralab, as well as his contributions to the world of science and technology. Johnson Controls also used the opportunity to present a paper found in its archives to the Smithsonian’s Natural Museum of American History. The fifteen-page paper, written by Kilby in 1951, was entitled, “Transistors—Their Manufacture and Use.”

During the ceremony, Kilby noted that he got his first exposure to transistors while working at Centralab, which sparked his interest in the field.

Kilby was inducted into the National Inventors Hall of Fame and the Engineering and Science Hall of Fame. He also received a number of other accolades including the Nobel Prize in Physics.

He married Barbara Annegers in 1948. The couple had two daughters and five granddaughters. Jack Kilby died on June 20, 2005, at the age of 81.

What if Kilby stayed in Milwaukee?

The fact that he developed his successful microchip designs weeks after he left Milwaukee, and prior to any additional education or training by his new employer at Texas Instruments, make it clear that Kilby possessed the skills to design the microchip before he left Milwaukee.

Of course, other matters were important as well. Would he have had the motivation and resources, as well as the luxury of time to spend on this unsupervised project? We’ll never really know the answers to these questions.

– Excerpted from The Magnificent Machines of Milwaukee and the engineers who created them, by Thomas H. Fehring, P.E., CreateSpace; First edition (2017), reprinted by permission. The 442-page book is available at many Milwaukee-area bookstores and online from Amazon.

If history had been just slightly different, the integrated circuit might have been invented in this Riverwest business. Carl A. Swanson photo