This large, flat rock in Estabrook Park with its two deep oval-shaped hollows was said to have been used by early Native Americans to grind corn. Once this was an important  historic attraction for the park but now has seemingly been forgotten. Photo by Carl Swanson

On May 14, 1952, the Milwaukee Journal printed an article promoting the idea of an automobile trip to various Milwaukee County Parks, including Estabrook. The article advised visitors not to miss an artifact that was then a well-known attraction in the park but today has been forgotten. 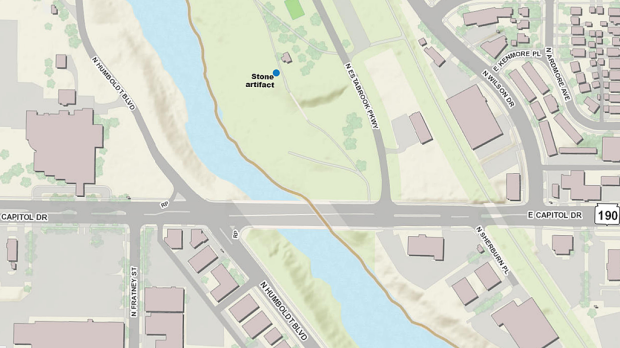 The stone is located at the south end of the park, on the west side of the walking path near the southwest corner of the restroom building.

To find this overlooked Estabrook attraction, one parks in the southernmost parking lot and crosses the road to the Lannon stone restroom building, behind which runs a paved path. On the opposite side of the path, just southwest of the building, in the deep shadows of the trees, is a large flat rock with two deep oval-shaped depressions.

“Legend has it,” the paper reported in 1952, “this stone was used by the early Indians for grinding corn. They put the grain in the hollows and pounded it.”

The reporter called it a ‘legend’ because, after all this time, who can say for certain? However, it may well be true. If so, this rock was used by Milwaukee’s earliest settlers, 2,000 years ago.

This large, flat rock in Estabrook Park with its two deep oval-shaped hollows was said to have been used by early Native Americans to grind corn. Once this was an important  historic attraction for the park but now has seemingly been forgotten. Photo by Carl Swanson

The earliest settlements in the area were built along waterways, and the Milwaukee River is close by this rock.

In 1919, Alanson Skinner of the Milwaukee Public Museum excavated a large burial mound where today’s Hubbard Park Lodge now stands, a short distance to the south. The mound builder culture typically created earthworks in areas where natural resources could sustain a long-term settlement.

Estabrook Park was the site of one of those settlements. Archaeologists have found stone tools, pottery, hearthstones, and other artifacts in the park dating back more than 2,000 years.

Also discovered were the bones of the people who once lived in Estabrook.

In 1933, the skeletal human remains were discovered in the park, along with a fire ring and various implements. An anthropologist with the Milwaukee Public Museum examined the bones and identified them as belonging to three Native American adults, two males and a female. One of the men showed evidence of suffering from severe periodontal disease while the female was past middle age when she died.
“The finding of these bones opens up a new phase in local history, for Estabrook Park apparently was a prehistoric campsite of which no record has presented itself,” W.C. McKern, head of the museum’s anthropology department, told the Milwaukee Journal in a May 23, 1933, article.
The stone seems a likely candidate for a historic artifact simply because it is ideal for the task of turning corn kernels into corn meal.

Artifact or not, one thing is certain: the rock isn’t talking. Photo by Carl Swanson

The rock itself is about four feet long and three feet wide. There is the nub of a half-inch metal rod embedded in the stone. It might be the attachment point for a long-gone historical marker. Or not. Again, who can tell?

But how does this oddly shaped boulder go from an attraction visitors shouldn’t miss in 1952 to something completely forgotten and buried in the undergrowth?